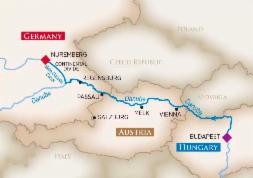 Book your 2021 Holiday river cruise now to save up to $2000 off per couple ($1000 per person) and receive a complimentary stateroom upgrade and $50 per person onboard credit. Plus receive Prepaid port charges & up to $150 per couple onboard credit courtesy of AffordableTours.com.
Must Book By Wed, Sep 30, 2020
View Promotion Terms & Conditions ›

Most Christmas markets open during the last week of November until approximately Dec. 22. Check with each country’s tourist office for more information. All rates are per person in USD for cruise only, based on double occupancy in a BB category stateroom (AB category for AmaMagna) unless stated otherwise. Onboard credit of $100 per stateroom ($50 per person) is based on double occupancy in USD and can be applied towards all onboard purchases. Promotional rates are valid on select departure for new bookings only. Savings are per stateroom, based on double occupancy. Complimentary upgrades applicable to categories BB – AB (AB – SB for AmaMagna), applies to one category upgrade, based on availability. Offers are combinable with AmaWaterways’ Past Passenger Privilege Program and Future Cruise Benefit Program. Offers are not combinable with any other promotions, limited to availability, capacity controlled and subject to change/termination without notice. Port charges, optional land programs, airfares and gratuities are additional. Other restrictions apply. Registration as a seller of travel does not constitute approval by the State of California.

2 nights in Budapest, 7-night cruise from Budapest to Nuremberg & 3 nights in Prague

BUDAPEST, HUNGARY. Arrive in Budapest and transfer to your hotel.

BUDAPEST. Often described as the '''Queen of the Danube,''' Budapest is well-known for Fisherman'''s Bastion, Buda Hill and its magnificent Hungarian Parliament building. However, this sprawling city is full of rich history and culture and offers many '''hidden''' treasures as you venture further past its river banks. During this excursion, your guide will take you deeper into the city to discover fascinating sites lesser-known to the average traveler. (B)

BUDAPEST ''' EMBARKATION. Board the ship for your Iconic Christmas Markets cruise. (B,D)

BUDAPEST. Often described as the '''Queen of the Danube,''' Budapest is well-known for Fisherman'''s Bastion, Buda Hill and its magnificent Hungarian Parliament building. However, this sprawling city is full of rich history and culture and offers many '''hidden''' treasures as you venture further past its river banks. During this excursion, your guide will take you deeper into the city to discover fascinating sites lesser-known to the average traveler. (B)

VIENNA, AUSTRIA. The '''City of Waltzes''' offers a treasure trove of gems just waiting to be discovered. Join a tour showcasing its regal splendors, such as the majestic Opera House and the former Imperial Palace of the Habsburgs before concluding in Vienna'''s historic city center. Afterwards, you'''ll visit the Christmas Markets. If you prefer a more active adventure, then join a guided bike along the Danube River. During the afternoon, visit the Sch''nbrunn Palace with a giant sparkling Christmas tree. This market presents a glittering and stellar Christmas experience. Or cap the day off with '''Vienna by Night''' Christmas Markets at the beautifully decorated Town Hall (Rathaus), Vienna'''s largest Christmas Market. (B,L,D)

MELK. High on a rocky outcrop lies the Melk Abbey, one of Europe'''s most revered Baroque monasteries. Visit this magnificent Benedictine Abbey, which now houses a museum chronicling its history and a famous library with countless medieval manuscripts. Alternatively, go on a guided bike ride around Melk. During the evening, enjoy a scenic cruise through the Strudengau Valley. (B,L,D)

PASSAU, GERMANY. Join a walking tour of this 2,000-year-old city, noted for its Gothic and Italian Baroque architecture and St. Stephen'''s. Go in search of Bavarian-style crafts at the Christmas Market. Or, for the active adventurer, join a guided bike tour along the Danube. Alternatively, you can travel through the serene Austrian Alps to Salzburg, birthplace of Mozart. Your full-day excursion in Salzburg includes a walking tour of the UNESCO-designated Old Town, its magnificent cathedral and its Christmas Markets, including the Hellbrunn Palace, where its inner courtyard is turned into a romantic backdrop for one of the most beautiful Christmas Markets in Austria. (B,L,D)

REGENSBURG. Regensburg is one of Germany'''s best preserved medieval cities, as well as a UNESCOWorld Heritage Site. Join a guided walking tour showcasing the city'''s architectural highlights, including the Old Town Hall and the Porta Praetoria, before visiting the Old Town Christmas market. As an alternate option, sample some of Bavaria'''s specialties'''beer, sausage and pretzels. Or bike to the base of Walhalla where there is a neoclassical white marble temple inspired by the Parthenon in Athens. Later in the day, you'''ll be treated to one of Bavaria'''s most beautiful and romantic Christmas markets at Thurn and Taxis, where you can watch artisansmake their unique arts and crafts. (B,L,D)

NUREMBERG. Enjoy a scenic morning cruise as the ship crosses the Continental Divide via the Main-Danube Canal to Nuremberg. Join a city tour of WWII highlights and then walk through Nuremberg'''s cobblestone streets to the Imperial Castle and 900-year-old city ramparts. Alternatively, you can taste your way through the city with a Franconian specialties tour, which introduces you to bratwurst, rotbier (red beer) and lebkuchen (gingerbread). Later, you can visit Nuremberg'''s Christkindlesmarkt, one of the world'''s largest and most famous Christmas markets. (B,L,D)

NUREMBERG ''' DISEMBARKATION ''' PRAGUE, CZECH REPUBLIC. Disembark the ship and enjoy the wonder of Nuremberg'''s other Christmas Markets before departing for Prague, where you will check into your hotel. (B)

PRAGUE. Discover Prague on a city tour or a castle hike. Both will reveal why Prague is considered one of Europe'''s most attractive cities, with a historic city center that'''s recognized as a UNESCO World Heritage Site. Later in the day, visit Prague'''s festive Christmas markets. (B)

PRAGUE. Beer has a long and illustrious history in the Czech Republic with the first brewery established in 993. Beer is a core part of the country'''s national identity, so join a Czech beer tasting and discover for yourself what makes the Czech'''s beer some of the very best in the world. (B)

DEPART PRAGUE. Bid farewell to Prague and prepare for your flight home. (B)
Get a Free Quote Now

Vince is my agent that tends to my wife and myself's travel desires. He is the most accommodating person with the company providing an extremely competitive competitive rate.