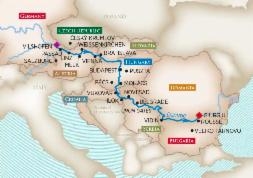 GIURGIU, BULGARIA ''' EMBARKATION. Embark on your cruise in Giurgiu. Tonight gather on board and meet your fellow passengers. (D)

ROUSSE. Travel through the Romanian countryside to the capital of Bucharest, known as the '''Little Paris of the East.''' Enjoy a panoramic tour of the historic city center and its elegant architecture, followed by a visit to the Palace of the Parliament, the second largest administrative building in the world. Later in the day, visit Bulgaria'''s ancient capital, Veliko Tarnovo, with its medieval fortress and multiple orthodox temples. You can opt instead to go to Rousse, known for its 19th- and 20th-century Neo-Baroque and Neo-Rococo architecture, and then afterwards visit the UNESCO-designated Rock-Hewn Churches of Ivanovo with frescos revealing exceptional artistry of 14th-century paintings. (B,L,D)

VIDIN. Explore Vidin, one of Bulgaria'''s oldest cities, and surrounding areas with a choice of excursions. Discover Belogradchik, one of Bulgaria'''s natural wonders, where you can hike around its most spectacular rock formations, and Baba Vida Fortress, the largest preserved medieval castle in Bulgaria overlooking the Danube. Alternatively, be welcomed into a local home for a demonstration and tasting of traditional Bulgarian yogurt and Banitsa, a delicious pastry with filo dough and cheese. Or you can choose to bike through Vidin for a more active adventure and see the castle. (B,L,D)

IRON GATES. The Iron Gates are some of Europe'''s most awe-inspiring natural wonders. The Danube narrows as it winds through a series of magnificent gorges between the Carpathian and Balkan mountains. The banks of the river dazzle with sheer-faced rocks that stretch high overhead along this natural border between Serbia and Romania. The ancient Serbian king Decebalus is proudly carved into the mountainside and always captivates travelers. (B,L,D)

BELGRADE. Explore Serbia'''s capital, Belgrade, on a city tour that includes the Kalemegdan Fortress and the Serbian Orthodox Temple of St. Sava. Or visit the Royal Palace, the official residence of the Serbian Royal Family; and then tour the House of Flowers, the mausoleum of Marshal Tito, who became the first President of Yugoslavia. Or enjoy a taste of the region by sampling Serbian plum brandy, ''livovitz, and delicious local delights at the Quburich Distillery and travel to Avala Mountain. Later in the day, for those wishing a more active adventure, join a guided bike tour or hike to well-preserved Belgrade Fortress with its conical towers. (B,L,D)

NOVI SAD ''' ILOK. Enjoy a walking tour of Novi Sad to explore why some have called the city the '''Serbian Athens.''' You'''ll see Dunavski Park and Stari Grad, the Old Town center. For a more active adventure, join a guided biking tour along the Strand and Danube Park, or a hiking tour to Petrovaradin Fortress. Alternatively, get hands-on with Vojvodina cuisine as you enjoy a lively demonstration and taste your culinary creation. Later in the day, tour the city of Vukovar, with its Franciscan Monastery, Church of St. Philip & Jacob and Eltz Castle, an 18th-century manor that holds the Vukovar City Museum. Or, travel to Ilok, a center of wine production since Roman times, and sample its famous Grasevina, Traminac and Frankovka wines. (B,L,D)

P''CS ''' MOH''CS. Explore P''cs, founded more than 2,000 years ago by the Romans. Visit the UNESCO-designated Christian Necropolis; St. Peter'''s Basilica, the city'''s main Catholic cathedral along with its catacombs; and Sz''chenyi Square, the heart of Old Town P''cs. Active travelers will enjoy a guided bike ride along the Danube and through Danube-Drava National Park, a protected flood-plain known for its populations of black storks, white-tailed eagles and grey cattle, a national symbol of medieval Hungary. (B,L,D) )

BUDAPEST. Tradition will be on full display in Puszta, the Great Hungarian Plain. Tour a genuine Hungarian cs''rda (farm) run by the world-champion carriage drivers, the Lazar brothers. Afterwards, be treated to an unforgettable performance of Hungarian horsemanship and then experience the Hungarians''' warm hospitality, along with a traditional lunch complete with typical goulash. (B,L,D)

BRATISLAVA. Host to the crowning ceremonies of 11 Hungarian kings and queens between 1536 and 1830, Bratislava certainly has earned the title '''Coronation City of Kings''' as you'''ll discover during your walking tour. Or savor local Slovakian craft beer at a local brew pub along with Slovakian snacks. For a more active adventure, hike up to Bratislava Castle, offering magnificent views of the city. (B,L,D)

VIENNA. The '''City of Waltzes''' offers a treasure trove of gems and you have two ways to discover them. Join a city tour showcasing its regal splendors, including the majestic Opera House and the former Imperial Palace of the Habsburgs before concluding in Vienna'''s historic city center, a UNESCO World Heritage Site, and then visiting St. Stephen'''s Cathedral. For a more active exploration of the area, take a guided bike ride along the Danube and to Klosterneuburg Abbey, founded in 1114. (B,L,D)

Linz. The ship arrives in Linz where you'''ll have several choices of excursions. Opt for a full-day excursion to Salzburg where you'''ll tour the historic center, Mirabell Gardens, Residenz Square and the Old Market. En route to Salzburg, stop at Mondsee, home of the Basilica St. Michael. Or join a morning walking tour through the old city center of Linz and by the Mozart House; or go on a bike tour of the city'''s famed '''Cultural Mile''' and the Danube. During the afternoon, you have three more options. Choose a half-day excursion to Salzburg or take a scenic drive through the Austrian Lake District with a stop in St. Wolfgang. You can also choose to visit charming ''esk'' Krumlov, located just over the Czech-Austrian border. (B,L,D)

PASSAU. Discover the city of Passau in one of three ways. Enjoy a walking tour and marvel at Gothic and Italian Baroque architecture and St. Stephen'''s Cathedral. Or choose between a guided bike tour along the Danube River, or a guided hike up to the Veste Oberhaus fortress. Later, cruise to Vilshofen, where you will be treated to a festive Oktoberfest celebration ''' an AmaWaterways exclusive. (B,L,D)

VILSHOFEN ''' DISEMBARKATION. This morning, disembark your ship in Vilshofen. (B)
Get a Free Quote Now