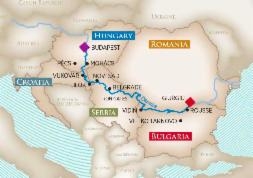 GIURGIU ''' ROUSSE, BULGARIA. Experience the best of Bucharest, Romania'''s capital, known as the '''Little Paris of the East,''' with its wide boulevards and Arc de Triomphe. Then visit Bulgaria'''s ancient capital, Veliko Tarnovo, with its medieval fortress and multiple orthodox temples. You can opt instead to explore Rousse, known for its 19th- and 20th-century Neo-Baroque and Neo-Rococo architecture, and then afterwards visit the UNESCO-designated Rock-Hewn Churches of Ivanovo with frescos revealing exceptional artistry of 14th-century paintings. (B,L,D)

NOVI SAD, SERBIA ''' VUKOVAR, CROATIA. Vukovar is a Croatian symbol of resistance, which you'''ll better understand on your city tour showcasing the Ov''ara Memorial and Eltz Castle. Alternatively, choose a wine tasting in Ilok, a center of wine production since Roman times, where you'''ll sample its famous Grasevina, Traminac and Frankovka wines. Back on board, cruise to Novi Sad, sometimes called the '''Serbian Athens.''' Discover Novi Sad on a walking tour to Dunavski Park and through Stari Grad, the Old Town center. If you prefer a more active exploration, join a guided biking tour or hike through Fruska Gora National Park. During the evening, visit Petrovaradin Fortress, a mighty stronghold no enemy has ever breached. (B,L,D)

MOH''CS - P''CS, HUNGARY. Enjoy a scenic morning cruise to Moh''cs. You'''ll then visit P''cs, founded more than 2,000 years ago by the Romans. Visit the UNESCO-designated Christian Necropolis; St. Peter'''s Basilica, the city'''s main Catholic cathedral along with its catacombs; and Sz''chenyi Square, the heart of Old Town P''cs. You will also see the Mosque of Pasha Qasim the Victorious, one of the symbols of the city. Or for wine connoisseurs, you'''ll want to go to the Szeksz''rd wine region, one of the oldest red-wine-growing areas in Hungary, established more than 2,000 years ago. You may also take an exhilarating guided bike tour around Moh''cs. (B,L,D)