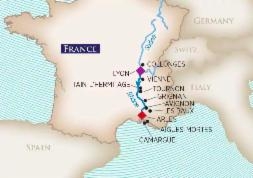 Amawaterways is an exceptional company! They went above and beyond when my sister fell and shattered her elbow the day before she, her husband and I were scheduled to start our Rhine River Cruise with Amawaterways in Basal. She and her husband had to remain in Basal so my sister could undergo surgery. I went on the cruise alone. Amawaterways sent their representative to the University Hospital Basal every day of her stay and helped with paperwork and offered much needed advice. In the meantime, the staff and passengers onboard the AmaKristina ensured that I had a wonderful time. A day did not pass that they didn't inquire about my sister's recovery. When she returned home, she received flowers and a lovely note from the company president. Amawaterways is definitely number one in my book.

The staff was so friendly and the made the trip even more enjoyable. The cruise manager, Marc, was amazing!

The AMA Kristina was a brand new boat and extremely nice. The staff was wonderful as well as the food. We really enjoyed the organization of the tours and the guides were really good.

Great cruise and great time of the year. As expected, some docking spots needed more time to fully appreciate, and others had too much time with too little to see, but the travelers are all different. Wonderful ship and crew, and the food was fantastic. AMA always does a wonderful job and is most attentive to their travelers. On the extensions, a city tour is very valuable, but if one does not choose the additional excursions offered, there is way too much free time in cities which offer fewer options to a newcomer on their own. Perhaps include a page of alternate sightseeing options, museums, trip advisor tours or such rather than just "free time" on your own, and meals on your own in a strange city. Once on the extension, we did not see our tour director a great deal even though hours were posted for the table in the lobby. Hotel staff was most helpful in question answering and pulling boarding passes, directions, etc.

AMA Waterways is an excellent provider of high quality river cruises. This was our 4th river cruise with AMA and we are planning number 5. Never a problem, everything works moothly and timely. Cruise managers are truly top quality as well as the local tour guides. I can't say enough positive things about AMA Waterways!