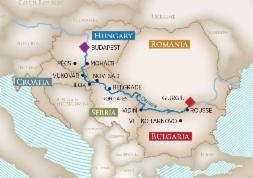 GIURGIU ''' ROUSSE, BULGARIA. Visit the ancient capital of Veliko Tarnavo. Built on three hills overlooking the Yantra River, this archaic city features Tsarevets Hills, the remains of a Royal Fortress, Royal Palaces and other historic sites. You'''ll also see the small village of Arbanasi, where you'''ll tour the frescos inside the Nativity Church and have an exclusive opportunity to taste Damascus Rose products, including jam, candy and liqueur. Alternatively, take a highlights tour of Rousse, often called '''Little Vienna,''' then hike up to the Ivanovo Rock-Hewn Churches, which were carved out of solid rock between the 12th and 14th centuries by Orthodox monks and feature medieval frescos. (B,L,D)

NOVI SAD, SERBIA ''' VUKOVAR, CROATIA. Choose from three morning excursions in Novi Sad. Visit a local home and learn how to prepare traditional Vojvodina cuisine followed by a tasting. Or, hike up to Petrovaradin Fortress, built to defend against the Ottoman Turks, and offering spectacular Danube views. Alternatively, you may bike along the Danube and the pier known as '''Strand''' where the locals relax during the summer months. Later in the day, enjoy a city tour of Vukovar, including the Franciscan Monastery, Church of St. Philip & Jacob and Eltz Castle. Or savor Grasevina, Traminac and Frankovka wines in Ilok, a center of wine production since Roman times. (B,L,D)

MOH''CS - P''CS, HUNGARY. Travel from Moh''cs to P''cs, founded more than 2,000 years ago by the Romans. Visit the UNESCO-designated Christian Necropolis; St. Peter'''s Basilica, the city'''s main Catholic cathedral along with its catacombs; and Sz''chenyi Square, the heart of Old Town P''cs. You will also see the Mosque of Pasha Qasim the Victorious, one of the symbols of the city. Or for the active cruiser, take a scenic guided bike tour through Danube-Drava National Park, a protected flood-plain known for its populations of black storks, white-tailed eagle and native grey cattle, one of the national symbols of medieval Hungary. (B,L,D)