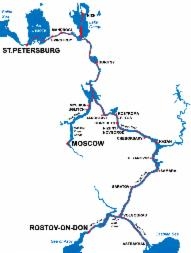 All our cruise ships are fully air conditioned and have outside-facing cabins.