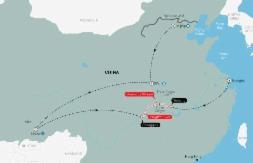 Early booking savings of up to 10% on select vacations when you pay in full at time of booking. Plus as always receive our AffordableTours.com 8% extra savings!
Must Book By Wed, Sep 30, 2020
View Promotion Terms & Conditions ›

Early Booking Savings requires payment in full at time of booking and is valid for new, individual bookings on 2021 itineraries and departure dates only. Offer applies to full-fare bookings only. All fares and savings listed are in US dollars. Rates and savings vary by itinerary, departure date and category of accommodations. Savings for eligible Europe and Russia voyages are: 5% for all Suite Category staterooms; 10% for all other stateroom categories. Savings for eligible Asia, India, and Egypt voyages are: 10% for all stateroom categories. Discounted savings amounts are based on the cruise-tour portion of bookings (including category upgrades and single supplements), after other applicable discounts are applied and do not apply to the purchase of air tickets, optional pre and post extensions or the Uniworld Travel Protection Plan. All applicable discounts are applied sequentially; fixed savings amounts are deducted prior to applying any percentage-based discounts. Offer is capacity controlled and may be modified or withdrawn at any time. Other restrictions may apply. Offer expires September 30, 2020.

Check out of your hotel and fly to Chongqing, the booming capital of western China, where you’ll board the Sanctuary Yangzi Explorer.
Meals Included: Breakfast, Dinner

Uniworld should advise potential customers of the level of activity, especially for this trip. While I personally had no problems with the demanding Itinerary, the elderly or disabled could not visit some of the sites we saw due to accessibility. Uniworld rents their boats so there is no consistency from trip to trip. This was a very beautiful, spacious boat and the staff were incredibly gracious and helpful. We felt very welcomed and appreciated. Four seasons was nice but food was too expensive and there were no alternatives since we were warned not to venture out on our own. Customer should be warned that they will be escorted by armed guards and there will be a lot of security checks on this trip.

The ship was outstanding, staff was extremely courteous and helpful, and the food was delicious and plentiful. Wonderful cruise Paris to Normandy with UniiWorld.

We had a pleasant, easy booking for our river cruise.

OUR TRAVEL AGENT KEVIN ORR WAS EXTREMELY RESPONSIVE TO OUR TRAVEL DESIRES. HE MADE EVERY EFFORT TO ACCOMMODATE OUR REQUESTS AND OVERALL WE WERE SUPREMELY PLEASED BY OUR TRIP AND THE EFFORTS MADE AFFORDABLE TOURS ON OUR BEHALF

This was our first river cruise, and we found Uniworld to be a good value and a very positive experience.

We enjoyed our trip and appreciated the many different services we received.

Uniworld does a very nice job and it was a nice experience.

Steve Warren was excellent to work with. He communicated clearly and accurately, took the initiative to keep us informed, and handled nonstandard requests effectively and with a high degree of professionalism.

This was our third river cruise with Uniworld and all have been excellent on every count. Cabin, dining, excursions, and service are all superior. All crew members contributed to making the passengers feel welcome and well cared for. We feel that Uniworld provides a good value for their products.

This Uniwirld river cruise was fantastic

Our Uniworld river cruise, Provence to Burgundy, was everything we expected and more. Their Masterpiece excursions are exceptional. We also loved not having to tip as it was included in our package.