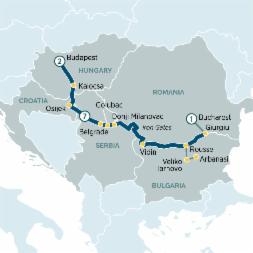 This is your chance to discover hidden gems and rare insights that go beyond ordinary travel encounters, right now you can book your next river cruise for up to 25% off. (Discount varies by date and/or itinerary, blackout dates may apply. Contact your Travel Consultant for full details.)
Must Book By Wed, Sep 30, 2020
View Promotion Terms & Conditions ›

Offer applies to new bookings made from August 31 – September 30, 2020 and applicable for select 2021 European River departures only and select 2022 Emerald Azzurra yacht departures as listed while supplies last. No retroactivity and non-transferable. Not combinable with any public offers. Discount is applicable to cruise + upgrade pricing, is not applicable on port/air/land days. Standard payment & cancellation terms apply. Offers are capacity controlled and may be extended, cancelled or withdrawn at any time without notice. Prices in US dollars, based on double occupancy and lowest cabin category available. Prices subject to availability. Emerald Waterways River Cruise prices listed above include savings based on departures: EWNB050621.1, EWAB030721.2, EWFB220721.2, EWCR250721.2. Port charges and taxes are included in the price. Complimentary Deposit Protection Plan (DPP) offer is only applicable to new non-future travel credit bookings only. Deposit Protection is non-refundable and non-transferable, and only protects the deposit amount paid on an Emerald cruise prior to the final payment due date. Air, land, excursions are not included in the plan, and any third-party supplier fees, such as hotels, will be subtracted from your deposit amount. We will credit the remainder to you towards an alternate tour or cruise that must be re-booked within 24 months.

Book your 2021 Europe river cruise early and save $1,500 per couple on all 8+ day itineraries, or choose $295 international economy flights. Save an additional $800 per couple when you pay in full within 14 days of booking itineraries of 8 or more days and $300 per couple on 5-day itineraries. Enjoy peace of mind with Free Deposit Protection, allowing you to change to another cruise with no change fees before final payment. Plus, reduced $250pp deposit.
Must Book By Sat, Oct 31, 2020
View Promotion Terms & Conditions ›

For new bookings 2021 European river cruises. Air offers are only applicable to bookings made 61 or more days before departure, otherwise an air credit will apply. A non-refundable initial deposit of $250 per person is required at the time of booking, with full payment required 90 days prior to departure. A secondary non-refundable deposit of $500 per person is due 6 months prior to departure for economy flights; $800 for premium economy. Maximum value of air ticket is $1200 per person inclusive of all taxes & fees. Economy Air only on Emerald Waterways’ choice of airlines and routes. Travelers who purchase their own air receive $750 per person savings on 8+ day itineraries, and $500 per person on 5-day itineraries.

Deposit Protection Plan: Value of Deposit Protection Plan is $125 per person and is applicable if guest needs to cancel or change a cruise for whatever reason the plan allows them to reallocate their non-refundable deposit for use towards an alternative future sailing. Deposit Protection is non-refundable and non-transferable, and only covers the cruise. Air deposits are not included in the plan, and any third-party supplier fees such as hotels will be subtracted from your deposit amount. These offers are not combinable with any other offer except for Travel Show vouchers, agent training vouchers, EmeraldEXPLORER vouchers, referral vouchers and early payment offers. Not combinable with group discounts. Taxes and port charges are included in the price. Offer available to residents of the 50 United States and Washington DC only. Offers and fares are capacity controlled and may be extended, cancelled or withdrawn at any time without notice.

This trip was wonderful, with only 160 passengers we were treated royally. Everyone on board the ship worked with only one thing in mind to please the customers.

Derek was very thorough and easy to work with. Our trip was what we expected.

We were fortunate the trip went as planned. A lock was damaged and the ship we were scheduled for was unavailable. Emerald provided a different ship and we completed our full itinerary. Great job Emerald. The trip wonderful. Great staff, tours and food. Our Affordable agent Allyson fulfilled all our needs efficiently providing excellent customer care.

AffordableTours.com is a travel agent for Emerald Waterways. Brochure Price is based on the itinerary's highest brochure price. Our price reflects our base price for the same departure as Brochure Price. All prices, itineraries, accommodations and dates are subject to change without notice and at any time. All prices are USD per person and based on double occupancy. Availability is limited and must be reconfirmed at time of booking. All prices change frequently and our website prices are not guaranteed until a deposit has been received by us. The prices on our website are intended to serve as a guide only and may not accurately reflect current prices. We are not responsible for errors, omissions, or changes in these prices until a booking has been confirmed by one of our agents. Please call us toll free at 1-800-342-0019 to confirm current prices and availability. Prices listed are per person, cruise only, and based on double occupancy.