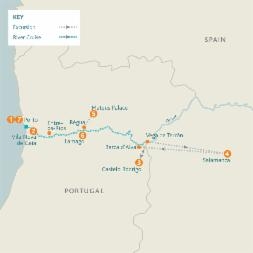 Commencing in the Roman city of Porto, the home of Port wine, Portugal’s once wild river Douro has been tamed by locks into resembling a series of finger lakes, adding greatly to the valley's ambience. Leaving behind the Atlantic influenced greenery of the coast you are soon immersed in a Mediterranean&nbsp;land of olives, vines, and picturesque, medieval hilltop villages. Our destination is the higher reaches of the valley from where we visit Salamanca - home of one of Europe’s oldest universities, two of its finest cathedrals, Spain’s finest city square and even the Inquisition! You will adore the away-from-it-all experience and visit some of Iberia’s most beautiful medieval towns, monasteries and vineyards, and feel you have been away for months!

Prices are per person, based on two people sharing a twin cabin with a limited number of single cabins available on all decks, at the relevant supplement. The price includes:  Full board from dinner on your day of arrival until breakfast on your final day; if you choose to travel with us on any of the full day excursions by coach, a packed lunch will be provided. Anyone choosing to stay on the ship may of course have lunch in the restaurant Morning/afternoon tea and coffee All visits and excursions as mentioned Coach travel as mentioned The services of a Riviera River Cruises cruise director
Get a Free Quote Now