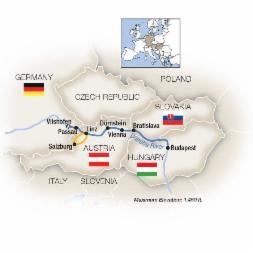 Selected as one of the "10 Best River Cruises" by Fodor's Travel... there is no better way to experience the heart of Europe with your family than on a leisurely Tauck Bridges Danube river tour and cruise aboard one of Tauck's custom-designed riverboats.Unpack only once as you travel from Budapest, Hungary, to Slovakia, Austria and Germany, enjoying action-packed shore excursions specially designed for families. Play medieval games on a visit to Devin Castle in Slovakia. Soar over Vienna on the Riesenrad (giant ferris wheel) in the Prater, the city's famous amusement park.  Visit Schönbrunn Palace, which Empress Maria Theresa and her daughter Marie Antoinette once called home. Go bicycling along the Danube and discover magical secrets – and "The Sound of Music" locations – at Schloss Hellbrunn in Salzburg. End your family's fun Danube River tour in Passau, Germany, where you'll make your own tasty marzipan creation!

Your family's Danube River cruise begins at 4:00 PM in Vilshofen, Germany. A transfer is included from Munich's Franz Josef Strauss International Airport or Munich Train Station directly to ms Treasures in Vilshofen. Board your riverboat, settle in, and meet fellow families at the Captain's welcome reception followed by dinner aboard ship tonight.
Meals Included: Dinner

If you think that you'll spend the first day of your journey tromping through musty museums and dusty cathedrals, think again! After your riverboat arrives bright and early in pretty Passau, Germany, disembark for your choice of a walking tour of this Baroque Bavarian "city of three rivers" at the junction of the Ilz, Inn and Danube, a geocaching tour through Passau, or a guided bicycle ride along the Inn River. Learn how marzipan, a candy made from sugar and ground almonds in all sorts of very realistic shapes, is made – and try your hand at making your own tasty tidbit in the shape of a face, very popular in Passau. After some free time to explore Passau on your own, reboard your riverboat and continue your family's cruise to Linz, Austria – enjoying lunch, a social hour, a discovery briefing, dinner and entertainment en route; arrive in Linz this evening.
Meals Included: Breakfast

Today, disembark in Linz for a full day of fun in and around lovely Salzburg, or stay aboard and explore Linz. Once upon a time, there was a Prince Archbishop of Salzburg who really liked playing practical jokes... and was maybe a little bit crazy. His many guests were astounded both by the Baroque beauty they found at his home, Schloss Hellbrunn (or Hellbrunn Castle), and the tricks he played on them in his "pleasure grounds" filled with gardens, fountains and gadgets that were a kind of 18th-century animatronics. Whether or not his guests found his pranks as funny as he did is another matter... but today, you'll find out for yourselves what surprises Schloss Hellbrunn has in store... and you may be as amazed by what you experience as his guests were! You'll also find some locations made famous by the movie The Sound of Music, including the pavilion that was the setting for the song Sixteen Going on Seventeen. Later, discover how much there is to see and do in beautiful, historic Salzburg, as you explore the Baroque hometown of composer Wolfgang Amadeus Mozart as you please. Join your Tauck Director for a stroll through beautiful Mirabell Gardens. Maybe you'll even find all 14 of the ancient drinking fountains scattered around the Old City... or have fun trying! Reboard the riverboat back in Linz for the evening; polish off your vocals and take part in "The Sound of Music" karaoke after dinner!
Meals Included: Breakfast

After cruising through Austria's Wachau Valley overnight, your riverboat arrives in the picturesque medieval town of Dürnstein, known for its 13th-century abbey and 16th-century houses along twisting, narrow, cobblestone streets. Take off on a leisurely bicycle tour* along the Danube River and through the countryside to a local village for some time on your own. Cycle back to Dürnstein, where you might want to hike up to the hilltop ruins of Kuenringerburg Castle, for terrific vistas of the town, river and surrounding vineyards. Within the walls of this very castle, England's King Richard the Lionhearted was held as a prisoner after the Third Crusade – although he probably couldn't enjoy the view like you can! This afternoon, your riverboat continues its Danube cruise to Vienna, arriving in Austria's inimitable capital late this evening.
Meals Included: Breakfast

Your family's day in Vienna begins with a guided visit to the huge – it has 1,441 rooms! – Schönbrunn Palace, the permanent summer residence of the Austrian Imperial Family, the Habsburgs, from Empress Maria Theresa's time in the 18th century until 1918. Once, only the Imperial family (which included future French queen Marie Antoinette, who grew up here) was allowed to walk through the garden Maze. Today, it's your turn; look for its hidden secrets! Your visit also includes a Marionette Theater performance. Have lunch aboard the riverboat, or spend the afternoon in Vienna. Following an early dinner onboard this evening, have some family fun at the world-famous Vienna Prater amusement park, featuring over 250 rides and attractions to enjoy. You'll find the Riesenrad, a giant ferris wheel (which film buffs will recognize from the 1940s film noir classic The Third Man); "extreme-speed" rides, merry-go-rounds and go-carts tracks; haunted houses and a fun house; and more. Overnight, your riverboat sails on to Bratislava, Slovakia.
Meals Included: Breakfast

As the day begins, your riverboat arrives in Bratislava, modern Slovakia's ancient capital city. Once ashore, head outside the city to the partially restored ruins of Devin Castle, perched high above the confluence of the Morava and Danube rivers. Explore the castle and enjoy a trip back to the Middle Ages with a knight tournament and medieval games, a fencing show, medieval dancing and more. Return to Bratislava for a fun interactive walking tour that includes a scavenger hunt through the city's pedestrian-only Old Town, which harbors more than 17 centuries' worth of stories to tell, and a knighthood ceremony; you'll have time this afternoon to do some exploring on your own, too. Back aboard the riverboat for your final night aboard ship, enjoy Slovak cultural entertainment and a farewell cocktail party followed by dinner onboard as you wind your way toward beautiful Budapest, Hungary.
Meals Included: Breakfast

Tauck's family Danube River cruise ends in Budapest, Hungary. Disembark your riverboat in Budapest. Fly home anytime after 11:30 AM. A transfer from the riverboat to Budapest's Ferenc Liszt Airport or Keleti train station is included. Be sure to allow 3 hours for check-in formalities at the airport. Guests who have booked a post-stay with Tauck in Budapest can enjoy a morning sightseeing tour of this historic city, which until the 19th century was actually two independent cities divided by the Danube River, Buda and Pest; learn about its turbulent history and see iconic sites such as Heroes' Square and Fisherman's Bastion.
Meals Included: Breakfast
Get a Free Quote Now

Selected as one of the "10 Best River Cruises" by Fodor's Travel... there is no better way to experience the heart of Europe with your family than on a leisurely Tauck Bridges Danube river tour and cruise aboard one of Tauck's custom-designed riverboats.Unpack only once as you travel from Budapest, Hungary, to Slovakia, Austria and Germany, enjoying action-packed shore excursions specially designed for families. Play medieval games on a visit to Devin Castle in Slovakia. Soar over Vienna on the Riesenrad (giant ferris wheel) in the Prater, the city's famous amusement park.  Visit Schönbrunn Palace, which Empress Maria Theresa and her daughter Marie Antoinette once called home. Go bicycling along the Danube and discover magical secrets – and "The Sound of Music" locations – at Schloss Hellbrunn in Salzburg. End your family's fun Danube River tour in Passau, Germany, where you'll make your own tasty marzipan creation!