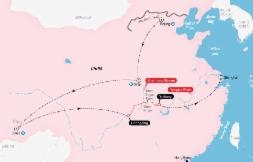 Check out of your hotel and fly to Chongqing, the booming capital of western China, where you’ll board the Sanctuary Yangzi Explorer. Then learn the word of the day: panda. Pandas are one of China’s most beloved (and adorable) cultural symbols, and you’ll get to see some of these gentle giants today.
Meals Included: Breakfast, Dinner