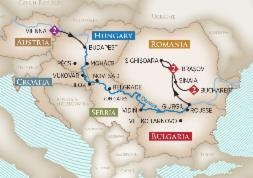 BUDAPEST, HUNGARY ''' EMBARKATION. Board the ship for your Gems of Southeast Europecruise. (D)

SCENIC CRUISING THROUGH THE IRON GATES. The Iron Gates is one of Europe'''s most awe-inspiring natural wonders. The Danube narrows as it winds through a series of magnificent gorges between the Carpathian and Balkan mountains, forming a natural border between Serbia and Romania. The ancient King Decebalus, the last king of Dacia, is proudly carved into the mountainside and always captivates travelers. (B,L,D)