Colors of Provence Cruise Only (Arles to Lyon) 2020

Colors of Provence Cruise Only (Arles to Lyon) 2020 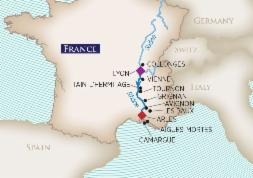 Save up to $2000 per stateroom with a complimentary stateroom upgrade and up to $100 onboard credit per stateroom on select Europe sailings. Savings vary by sailing and/or itinerary, not all sailings will qualify for offers. Contact your Travel Consultant for full details. Plus receive Prepaid port charges & up to $150 per couple onboard credit courtesy of AffordableTours.com.
Must Book By Tue, Mar 31, 2020
View Promotion Terms & Conditions ›

Terms and Conditions: All rates are per person for cruise only, based on double occupancy in an E category stateroom for Europe, BB (AB category for AmaMagna) for Holiday Cruises, and C for Mekong, unless stated otherwise. Promotional rates are valid on select sailings for new bookings only made from January 1 - March 31, 2020. Up to $2,000/ C$2,400 Savings are per stateroom, based on double occupancy, and varies by itinerary and sailing date. Complimentary upgrades applies to one category upgrade, based on a like-for-like stateroom category, and excludes suites ; upgrades for Holiday cruises are applicable to categories BB – AB (AB – SB for AmaMagna). Onboard credit of $100 per stateroom ($50 per person) is based on double occupancy in USD and can be applied towards all onboard purchases. Pre-paid gratuities apply to select Mekong sailings, apply to the cruise-only portion and have no cash value. 25% Single Supplement is applicable on the cruise-only portion, applicable to all stateroom categories excluding A+, AA+, S, SS, L, GS, OS; not combinable with any other promotions/discounts. Offers are combinable with AmaWaterways’ Past Passenger Privilege Program and Future Cruise Benefit Program. Offers are not combinable with any other promotions, limited to availability, capacity controlled and subject to change/termination without notice. Up to 5% Bonus Commission is only applicable to Holiday Triple Savings, is added to agency’s standard commission and cannot be combined with other enhanced bonus commission programs/offers; and not applicable to Groups or Tour Operators. Port charges, optional land programs, airfares and gratuities are additional. Other restrictions apply. Most Christmas markets open during the last week of November until approximately Dec. 22. Check with each country’s tourist office for more information.

EMBARKATION - ARLES, FRANCE. Board your cruise in Arles. This evening, meet your fellow passengers for a Welcome Dinner. (D)